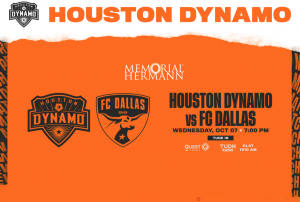 The Houston Dynamo close a two-game stretch at BBVA Stadium on Wednesday against FC Dallas in the third leg of the Texas Derby this season.

Houston opened the two-game stretch with a 2-1 loss to Sporting Kansas City on Saturday in the fourth and final meeting between both clubs during the regular season. Dynamo Academy product Marcelo Palomino made his professional debut and became the seventh Academy product to represent the Dynamo in league play.

Houston’s lone goal of the game came in the final 10 minutes of the match off a corner kick, a first for the club this season. Colombian forward Darwin Quintero tallied his eighth assist of the season when his corner kick found Sam Junqua inside the box for his first professional goal. Quintero leads the team in goals this season with five and assists with eight.

Houston look to earn their first victory in the regular season series with Dallas on Wednesday and snap a six-game winless streak that began on the road with the 1-1 draw against the Colorado Rapids on Sept. 9. The Dynamo and Dallas split points in the first meeting this season playing to a scoreless draw on Aug. 21. FC Dallas pulled away, courtesy of a second half Franco Jara goal, to earn three points with a 2-1 victory on Sept. 12.

FC Dallas enter Wednesday’s game with a 2-1-2 record in their last five matches. Dallas won two consecutive games following their 2-1 victory over Houston on Sept. 12. Jara has settled in after a challenging stretch to open the season and now leads the team with five goals. The Dynamo backline will also have to limit Santiago Mosquera who has scored four goals in 333 minutes this season.

Here are three key points ahead of Wednesday’s game: