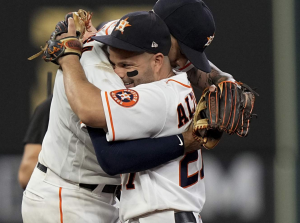 When it comes to dynamic duos, there’s often a clear-cut top dog and a trusty sidekick.

That’s not the case with second baseman Jose Altuve and shortstop Carlos Correa, Houston’s middle-infield combo who both shine equally bright for the Astros.

“A lot of times you have one All-Star caliber (player) and like a … Robin,” manager Dusty Baker said. “But this time you’ve got two Batmans.”

The pair played its 66th postseason game together on Saturday, which is the most by any shortstop and second base duo in MLB history.

The two cornerstones of the franchise, or to use Baker’s term, the team’s vertebrae, have played together since Correa’s debut in 2015, a year that featured their first trip to the postseason.

Altuve doesn’t recall a specific conversation they had back then about their expectations for the future, but he knows they often discussed “winning and playing together for a long time.”

They’ve certainly accomplished both of those goals. This season marks their sixth postseason trip and they’ve helped the Astros to a fifth consecutive AL Championship Series where they’re tied 1-1 with the Boston Red Sox.

They’re looking for a third trip to the World Series after losing to Washington in 2019 following their 2017 World Series win that was later tainted by a sign-stealing scandal.

Houston won more than 100 games in three of the seasons since Correa made it to the big leagues and finished this regular season with 95 victories to capture their fourth AL West title in five years.

“It’s hard to imagine something like this,” Altuve said. “What we’re living is a dream come true. We thank God every day for the opportunity to play together, for what we’re doing. And it’s been, it’s been amazing.”

Altuve hit a two-run homer to tie Game 1 of the ALCS Friday night before Correa’s solo shot in the seventh inning put them on top in a 5-4 win. Boston hit two grand slams in Game 2 to tie the series with a 9-5 victory.

Game 3 is Monday night in Boston where the Astros will have to rely more heavily on Altuve, Correa and the rest of their high-powered offense after rash pitching injuries.

Altuve’s home run on Friday was the 20th of his postseason career, tying him with Yankees’ great Derek Jeter for third-most in MLB history. Not to be outdone, Correa’s blast gave him five RBIs this postseason and 55 in his career to pass Albert Pujols for most of any active player.

Though Altuve now sees Correa as an equal, Correa still looks up to Altuve like a kid who idolizes his older brother.

Asked about Altuve, Correa reels off a list of some of his many accomplishments, which include the 2017 AL MVP, five Silver Slugger Awards, and capturing the AL batting title three times. But what impresses Correa the most about Altuve is not that he’s won those many awards, but rather the way he continues to work after collecting all that hardware.

“When you have the best player of your team, that captain, that franchise player that everybody looks up to working that hard, it’s just contagious,” Correa said. “Everybody else in the organization does the same thing, so I feel like he inspires everybody in that clubhouse every single day.”

Correa becomes a free agent at the season’s end. And there’s increasing concern that the Astros won’t be able to keep him, despite owner Jim Crane saying recently that he believes they’ve got a chance. Correa would like to stay in Houston and teammates and coaches alike want him to remain with the team.

But Altuve seems to be the only one who truly believes that he will. He mentions that he doesn’t believe these are the last games he’ll be playing with Correa without even being asked.

“I still feel like we’re going to go and sign him,” Altuve said. “We have to. If we want to keep doing what we’re doing, we need to sign Carlos.”

Since Altuve’s been so vocal in the media about his desire for his buddy to remain alongside him in Houston for years to come, he believes Crane should have already received his message loud and clear.

But just in case he hasn’t, Altuve is prepared to plead his case to Crane personally.

“I have to talk to him,” Altuve said. “I’m going to call him for sure and tell him we have to keep Carlos.”