In an unexpected video posted to Twitter on Tuesday night, President Donald Trump denounced a sweeping COVID-19 relief package he was expected to sign, calling it a “disgrace” and urging congressional leaders to make several changes to the bill including increasing direct payments for Americans.

“It’s called the COVID relief bill, but it has almost nothing to do with COVID,” he said in a video posted just moments after he issued a raft of pardons for several allies. “I’m asking Congress to amend this bill and increase the ridiculously low $600 to $2,000 or $4,000 for a couple.”

The president stopped short of saying he would veto the bipartisan legislation but was expected to sign the measure alongside a $1.4 trillion spending bill to fund the government. Trump called on Congress to remove “wasteful and unnecessary items from this legislation,” appearing to conflate the relief bill with the government spending measure.

The roughly $900 billion measure was attached to a $1.4 trillion spending bill to fund the federal government through Sept. 30, 2021 (the end of the fiscal year) to form a nearly 5,600 page-bill that is one of the largest pieces of legislation Congress has ever tackled. The measure also includes bipartisan provisions like the end of surprise medical billing and legislation creating Smithsonian museums for women and Latinos.

In implying a threat to veto the bill, which Congress passed Monday night, Trump also referenced his efforts to somehow stay in office despite President-elect Joe Biden’s win in November.

“I am also asking Congress to immediately get rid of the wasteful and unnecessary items from this legislation, and to send me a suitable bill, or else the next administration will have to deliver a Covid relief package,” Trump said. “And maybe that administration will be me, and we will get it done.”

Trump is set to leave office on Jan. 20.

Shortly after his video remarks dismissing the relief package, Trump tweeted out another video cataloging his complaints about the election, a list of unverified and false claims alleging voter fraud.

If Trump vetoes the bill, Congress could override it with a two-thirds majority vote in the House of Representatives and the Senate. The measure sailed through the House 359-53 and in the Senate by 92-6.

Any attempt to veto the measure could delay Treasury Secretary Steve Mnuchin’s plans to send out the first wave of direct payments next week.

The latest round of stimulus – the fifth passed by Congress since the pandemic began nearly a year ago – was the result of intense negotiations in recent days as lawmakers and their staffs worked around the clock on a compromise that drew criticism from the far right for being too costly and from the far left who said it didn’t go far enough to help Americans.

The measure comes at a crucial time for the economy as an eviction moratorium is about to expire and federal unemployment benefits are about to run out. In addition, the bill provides money for COVID testing and newly available vaccines that are designed not only to save lives but eventually lead to an easing of social distancing measures and capacity limits that have squeezed businesses, notably restaurants.

In a rare moment, House Speaker Nancy Pelosi encouraged Trump’s demands in a tweet: “Republicans repeatedly refused to say what amount the President wanted for direct checks. At last, the President has agreed to $2,000 – Democrats are ready to bring this to the Floor this week by unanimous consent. Let’s do it!”

“Maybe Trump can finally make himself useful and get Republicans not to block it again,” he concluded.

Brendan Buck, a former spokesman for GOP House Speakers Paul Ryan and John Boehner noted that the bill passed with “way more votes than necessary to override a veto, so there’s not really too much drama here,” he tweeted. “But, man, you’re not so happy if you’re an R who voted for the bill he’s now dumping on.” 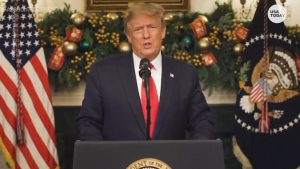