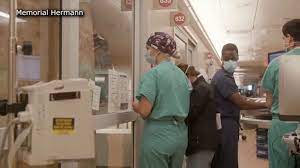 The chief physician executive at Memorial Hermann Health System spoke about the near future of the COVID-19 pandemic and what we could expect to see in the coming weeks.

The omicron variant dominated the latest wave of COVID cases and nearly pushed Texas hospitals to its breaking point with record-breaking numbers of cases and hospitalizations, according to data from the Texas Department of State Health Services.

Dr. James McCarthy, a chief physician executive and executive vice president for Memorial Hermann, said, collectively, its hospital staff is starting to see signs of relief from the latest surge.

“We’re seeing the testing positivity, the number of new cases, all of those (numbers) are trending down,” McCarthy said. “Also, we are very comforted by what we are seeing in the city of Houston’s wastewater data, where they’ve shown a dramatic drop in the viral load locally over the last couple of weeks. We use that as an early indicator for what’s going to happen with hospitalizations over the weeks to come, so we’re feeling very optimistic that we’ve created this wave. We feel like the hospitals have weathered this storm again.”

According to the Texas Medical Center, Houston-area hospitals saw a .08% decrease in COVID hospitalizations the week of Jan. 17.

Harris County Public Health reports its positivity rate is 27.7% as of Friday and on Jan. 10, Judge Lina Hidalgo raised the county’s COVID-19 threat level to red “severe,” the highest placement on the scale.

McCarthy said the Memorial Hermann hospital systems numbers have slowly declined, and its number of intake patients has decreased 10% since the peak of the wave two weeks ago.

“For the next several months, we think the local conditions should continue to improve,” said McCarthy. “Cases will continue to fall. We have a large portion of the greater Houston area that’s either vaccinated, or has had omicron, or had both. We think that the level of immunity in the community is much higher than it’s ever been before, and that’s relatively protective from a large outbreak happening again.”

He said what could change is the possibility of another variant.

According to the Centers for Disease Control and Prevention, new variants of the virus are expected to occur. This week, the World Health Organization and the CDC stated the latest omicron subvariant was not listed as a variant of concern and there are reports of very low circulation in the United States.

McCarthy said there is still time to get vaccinated or get your booster shot.

“We should not believe that even though the wave is declining, that we’re past this yet,” McCarthy said. “We’re headed in a good space, but we still need to be cautious and take precautions, especially if you’re medically vulnerable.”