The entire U.S. is on high alert over coronavirus, with the White House coronavirus task force issuing one of its strongest warnings yet, that ‘the COVID risk to all Americans is at a historic high,’ in its latest situation report to states.

‘We are in a very dangerous place,’ the task force said in the report, sent to states Tuesday.

The report is sent every week to U.S. states and regularly paints a much darker picture of the coronavirus crisis in the U.S. than is presented by the public faces of President Trump’s task force. It warned that the post-Thanksgiving surge of infections and hospitalizations threatens to ‘compromise COVID patient care, as well as medical care overall.

New cases per capita are shown on a gruesome map in the report, in which nearly the entire U.S. appears as one giant hotspot, with 19 states including North Dakota, South Dakota, Wyoming, and New Mexico, ranking as top areas of concern after reporting at least 500 new cases per every 100,000 residents last week.

It comes after Dr. Scott Atlas, President Trump’s divisive appointee to the task force resigned on Monday – the same night that the president hosted the first of his 20 planned lavish Christmas parties, where Trump teased a 2024 election run in front of a crowd of mostly maskless guests.

On Tuesday, the U.S. recorded its highest single-day death toll since April 30 with 2,597 fatalities, according to an analysis of data from Johns Hopkins University.

For the fourth day in a row, the number of Americans hospitalized for COVID-19 hit a record high on Tuesday, with 98,691 people getting inpatient treatment, data from the Covid Tracking Project show.

‘I have no doubt that we’re going to see a climbing death toll…and that’s a horrific and tragic place to be,’ Josh Michaud, associate director of global health policy at the Kaiser Family Foundation, told the AP.

‘It’s going to be a very dark couple of weeks.’

Climbing deaths and hospitalizations in the U.S. underscore the urgent need to get a coronavirus vaccine approved – but Food and Drug Administration (FDA) advisors aren’t scheduled to decide whether to give emergency authorization to Pfizer’s jab until next week, despite the shot getting the green light from officials in the U.K. 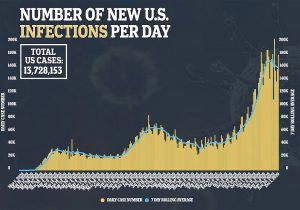