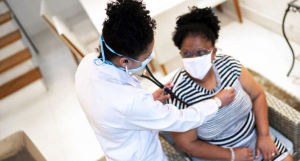 Scientists aren’t sure if there’s a cumulative effect on your health from repeated COVID-19 infections.

However, what does seem clear is that every reinfection carries the risk of serious illness, death, or long-term disability.

Reinfection “adds non-trivial risks of all-cause mortality, hospitalization, and adverse health outcomes in the acute and post-acute phase of the reinfection,” according to a new pre-print study from researchers at Washington University School of Medicine and the VA Saint Louis Health Care System in Missouri.

The preliminary study included data on more than 250,000 veterans who had one COVID-19 infection, nearly 39,000 people who had one or more reinfection, and more than 5 million people in a control group.

“The risk and [disease] burden increased in a graded fashion according to the number of infections,” wrote the authors of the study, which has not yet been peer-reviewed or published in a medical journal.

The researchers reported that the probability of negative health outcomes due to reinfection rose regardless of vaccination status and included both the acute phase of the reinfection and long-term health issues occurring after acute symptoms such as fever and shortness of breath abated.

“What’s really eye-opening is the long-term manifestation of this disease. Most people bounce back but not everyone,” said Dr. Ziyad Al-Aly, a study author and an assistant professor of medicine at Washington University School of Medicine as well as director of the Clinical Epidemiology Center and chief of research and education service at the Veterans Affairs St. Louis Health Care System.

“We were asking a simple question: Does reinfection matter?” Al-Aly told Healthline. “We were not comparing first and [subsequent] infections, but asking whether it’s worth it to protect yourself against a second infection.”

The answer, said Al-Aly, is that “every time you’re infected, you’re rolling the dice.”

“You may have been vaccinated or had a previous infection, but that doesn’t eliminate your risk,” he said, noting that the risk of serious illness from reinfection with COVID-19 ranged from about 3% to 5% of all cases.

“It’s still wise and responsible to try to protect yourself from reinfection,” he said.

Time can also be a factor.

“As you get further from your vaccination, boosters, and previous infections, the risk of reinfection increases significantly,” Dr. Luis Ostrosky, an infectious disease specialist at UT Health Houston’s Memorial Hermann Hospital in Texas, told Healthline.

Al-Aly acknowledged the limitations of the study. They included the fact the VA population is older, whiter, more male, and in worse overall health than the general population.

However, he noted, the sheer number of people included in the study meant that significant populations of women, minorities, and younger people were included in the analysis. Future research will focus on whether the same findings apply to these subpopulations.

Looking toward the future

Past studies have indicated that COVID-19 reinfection rates were low among the earliest variants of the disease but rose when the highly contagious Omicron variant spread around the world in late 2021 and early 2022.

Researchers say that the latest COVID-19 variants, such as Omicron B.A.5, are even better at evading the immunity offered by vaccination or previous infections.

“It’s still very clear that getting vaccinated helps protect people from getting seriously ill from COVID-19,” said Dr. Emily E. Volk, the chief medical officer at Baptist Health Floyd in Indiana and president of the College of American Pathologists.

“I don’t think we know if there is a cumulative effect from reinfection,” Volk told Healthline. “But getting a COVID-19 reinfection is not a risk-free event for anyone, including the risk of long-term effects. We can solidly say that.”

Ostrosky said that, anecdotally, people who had milder cases of COVID-19 on the first infection seem to have milder cases when reinfected. Those with more severe cases initially also tend to have more difficult reinfections — perhaps because their ability to fight the subsequent infection was damaged during their first bout with the disease.

Even a mild reinfection could carry risks, however.

“We don’t know the long-term effects of multiple infections even if they are mild,” said Ostrosky.

Volk said that while there is little public enthusiasm for a return to mask mandates, both she and Ostrosky recommended wearing a mask when indoors, especially in crowded spaces with poor ventilation, and particularly if you’re at elevated risk, or have someone in your life who is.