Jackson Lee – “In short, the Commission aims to study the impact of slavery and continuing discrimination against African-Americans, resulting directly and indirectly from slavery to segregation to the desegregation process and the present day. The commission would also make recommendations concerning any form of apology and compensation to begin the long-delayed process of atonement for slavery.”

Washington, DC – Congresswoman Sheila Jackson Lee, a senior member of the House Committees on Judiciary, Budget, and Homeland Security, Ranking Member of the Judiciary Subcommittee on Crime, Terrorism, Homeland Security and Investigations, issued this statement on the introduction of H.R. 40:

“The impact of slavery and its vestiges continues to affect African Americans and indeed all Americans in communities throughout our nation.  This is why I am pleased to submit H.R. 40, the Commission to Study and Develop Reparations Proposals for African Americans Act; today to the House of Representatives and then on the first day of legislative business, Monday, January 4th, 2021 introduce H.R.40.  This legislation is intended to examine the institution of slavery in the colonies and the United States from 1619 to the present, and further recommend appropriate remedies.  Since the initial introduction of this legislation, its proponents have made substantial progress in elevating the discussion of reparations and reparatory justice at the national level and joining the mainstream international debate on the issues.  Though some have tried to deflect the importance of these conversations by focusing on individual monetary compensation, the real issue is whether and how this nation can come to grips with the legacy of slavery that still infects current society. Through legislation, resolutions, news, and litigation, we are moving closer to making more strides in the movement toward reparations.

“I am proud to once again reintroduce this legislation on the first day of legislative business in the 117th Congress which is January 4, 2021. Especially following the tremendous support of this piece of historic legislation enjoyed in the last congress. In the 116th Congress, H.R. 40 had the support of 173 cosponsors. During the 117th Congress, we expect even more cosponsors to join.   The groundswell for this bill was so considerable in the last Congress that the House of Representatives held a major hearing on this matter to consider this legislation and passage.

“Today there are more people at the table — more activists, more scholars, more CEOs, more state and local officials, and more Members of Congress.  However, despite this progress and the election of the first American President of African descent, the legacy of slavery lingers heavily in this nation. While we have focused on the social effects of slavery and segregation, its continuing economic implications remain largely ignored by mainstream analysis. These economic issues are the root cause of many critical issues in the African American community today, such as education, healthcare, and criminal justice policy, including policing practices. The call for reparations represents a commitment to entering a constructive dialogue on the role of slavery and racism in shaping present-day conditions in our community and American society.

“I believe that H.R. 40 is a crucial piece of legislation because it goes beyond exploring the economic implications of slavery and segregation.  It is a holistic bill in the sense that it seeks to establish a commission to also examine the moral and social implications of slavery. In short, the Commission aims to study the impact of slavery and to address continuing disparities in the African American community and discrimination against the African American community, resulting directly and indirectly from slavery to segregation. The commission after its study would offer proposals concerning the long-term impact of slavery and to bring about solutions to these ongoing disparities in the African American Community. As in years past, the theme behind moving H.R.40 based on Dr. King’s words “Why we can’t wait,” which connotes the fact that we must cure these ongoing disparities in the African American community and the passage of this legislation in the 117th Congress would move us swiftly towards that goal.  Though the times and circumstances may change, the principle problem of slavery continues to weigh heavily on this country. A federal commission can help us reach into this dark past and bring us into a brighter future.” 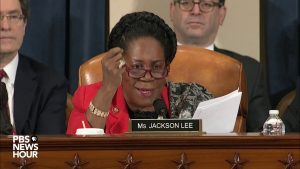