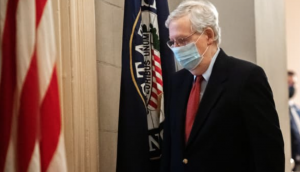 Congress moved perilously close to letting the government shut down as lawmakers failed Friday to put the finishing touches on a massive spending and coronavirus rescue package.

Ahead of the midnight Friday deadline to pass a spending bill, the House introduced a two-day stopgap bill to keep the government running. Lawmakers gave themselves about seven-and-a-half hours to get it through both chambers of Congress, including a Senate where one member’s objection can block its swift passage.

Leaders on Capitol Hill have said for days they are close to a deal on a $900 billion relief proposal that would accompany a $1.4 trillion spending bill. However, some new disputes have prevented Washington from sending fresh aid to struggling Americans for the first time in nearly nine months.

Passing a temporary spending measure known as a continuing resolution “could prove to be a pretty heavy lift,” No. 2 Senate Republican John Thune of South Dakota told reporters Friday. To approve the measure quickly, the Senate would need the support of every senator. A handful of lawmakers have suggested they could hold up passage of a short-term spending bill.

Thune also signaled it could take days more to iron out a final coronavirus aid package as millions of Americans await help.

“It’s coming together, it’s just taking time, but it’s slower,” he said. “And you know I think we have to assume that even when there’s a deal announced, that by the time it gets written up and processed, we’re going to be pushing through the weekend.”

Just after 2 p.m. ET on Friday, House Majority Leader Steny Hoyer, D-Md., said the chamber would go into a recess until 5 p.m. while congressional leaders try to get a “clearer picture” of how to move forward. He told representatives to keep Friday night, Saturday and Sunday free.

If lawmakers can approve a spending bill before Monday, the damage from a lapse in federal funding would be limited.

Congressional leaders have pledged to work through the weekend and pass a bill before they head home for the holidays. The health and livelihoods of millions of Americans depend on Congress sending out more aid before the end of the year.

“The talks remain productive,” McConnell said Friday morning. “In fact, I am even more optimistic now than I was last night that a bipartisan, bicameral framework for a major rescue package is very close at hand.”

As health-care workers start to receive Covid-19 vaccinations during a crushing wave of infections across the country, continued distribution of shots will require federal funding. The outbreak has killed more than 310,000 people nationwide as the U.S. struggles to contain its spread.

Meanwhile, 12 million people will lose unemployment insurance the day after Christmas if Congress fails to extend pandemic-era provisions that expanded benefits. If a federal eviction moratorium lapses at the end of the month, millions will face the threat of losing their homes.

While the developing $900 billion relief plan is set to extend those jobless benefits, it is unclear now how it will address eviction protections and any assistance for people who owe back rent.

The proposal is expected to reinstate a federal unemployment insurance supplement at $300 per week. A $600 per week federal payment put in place in March expired during the summer, sending the incomes of millions plummeting.

The package would include direct payments of $600, though it is unclear who will be eligible to receive them. Families are expected to get $600 sums for children, as well. Progressives in Congress and some Republicans have called the sum too low for people scraping by during the pandemic, noting that lawmakers easily approved a $1,200 direct payment in March.

White House advisors talked President Donald Trump out of making a last-second push to send checks of up to $2,000 to Americans, The Washington Post reported Thursday.

Sen. Josh Hawley, R-Mo., tried to approve a measure that would send another $1,200 direct payment on Friday. He called the cash injection “the least that we can do” for working families.

Sen. Ron Johnson, R-Wisc., then objected to passing the measure due to national debt concerns, arguing tax cuts and deregulation would better help Americans who do not have jobs during the pandemic. It is unclear how those measures would help people struggling to afford food and housing now.

The exchange underscored the challenges Congress will face in both preventing a shutdown and passing a rescue package in the coming days. Johnson called even the $900 billion package, which includes only $600 checks, “way too big.”

Hawley said he would block a short-term government funding bill unless he sees a final relief proposal that includes direct payments.

Sen. Bernie Sanders, I-Vt., tried to pass a proposal that would send $1,200 direct payments later Friday afternoon. The senator, backed by Senate Minority Leader Chuck Schumer, D-N.Y., said that “in this time of crisis, it is comical that our Republican friends discover once again that we have a deficit.”

Congress’ relief plan would include at least $300 billion in small business support. It would also put funds into Covid-19 vaccine distribution and testing and offer relief to hospitals.

The proposal would put money into schools and the transportation sector, as well.

A handful of issues have tripped up the final stage of negotiations. They include a Federal Emergency Management Agency relief fund for states and restrictions Sen. Pat Toomey, R-Pa., wants to put on the Federal Reserve’s emergency lending powers during the pandemic, according to NBC News.

“Proposals to sabotage President Biden and our nation’s economy are reckless, they’re wrong, and they have no place in this legislation,” she said in a statement.

In a later statement, the chairs of the House Financial Services and Ways and Means Committees said an agreement “was within sight” before the GOP started pushing for what they called an “unacceptable provision.”

“Senate Republicans’ extreme demand threatens to derail this urgently needed action, and it must be immediately abandoned so that we can move forward,” Reps. Maxine Waters, D-Calif., and Richard Neal, D-Mass., said in a statement.

A Toomey spokesman did not immediately respond to CNBC’s request to comment on Democrats’ criticism.

Congress passed the more than $2 trillion CARES Act in late March, offering robust economic support in the early stages of the pandemic. But lawmakers failed to offer any new assistance in the ensuing months, even as the virus raged, financial lifelines fell to the wayside and cracks emerged in the economic recovery.

Democrats have pushed for significantly more relief. Biden has called the $900 billion plan a “down payment” and signaled he will try to approve more aid after he takes office on Jan. 20.

McConnell for months pushed for only about $500 billion in new spending. Many in his party resisted putting even that much money into a relief plan.

Next year, Democrats will likely push for new aid for state and local governments, which could have to lay off first responders as they face budget crunches. The GOP did not agree to send the relief without liability protections for businesses.

Congressional leaders agreed to set both issues aside as they negotiated the year-end package.