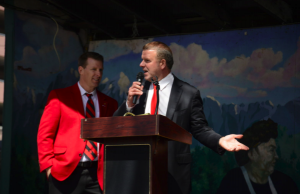 Tilman Fertitta, the chairman of the UH System Board of Regents and one of the University’s most prominent dignitaries, donated $50 million to the College of Medicine, UH announced Thursday morning.

The Tilman J. Fertitta Family College of Medicine, as it’s now known, hopes to address issues of health care inequity and access across the state of Texas, the University stated in a press release.

Fertitta, who has sat on the Board since his appointment in 2009, said he believes in the University and its ability to serve the Houston area community.

“The future is ahead of us,” Fertitta said. “This is the baby, and while there’s no telling what the future may hold, I wouldn’t have done this if I didn’t expect to see great things to come from the College of Medicine.”

According to the press release, the $50 million donations is being distributed across four different areas.

The first $10 million will be set aside to fund five endowed chairs considered to be “national stars” in their fields, with a focus on health care innovation.

Another $10 million will provide scholarships to support endowed graduate research stipends and fellowships and $10 million is being set aside to provide for start-up costs, including facilities, equipment and program expenses.

In addition, the gift marks the launch of a $100 million fundraising campaign for the Fertitta Family College of Medicine, which hopes to provide additional funding for scholarships, faculty recruitment, and operational needs.

The College of Medicine had its inaugural class of 30 medical students in 2020. It has since begun transitioning these students from in-class learning, to doing their first clinical rotations, training on-site with licensed practitioners.

Jalyce Taylor, a second-year medical student at UH, expressed her excitement about the donation and the future of the Fertitta Family College of Medicine.

“It’s really amazing to be here,” Taylor said. “We’re very excited to have a donor contribute to our school, one that really believes in the mission and the goals of the UH College of Medicine.”

The Fertitta Family College of Medicine will be the second building to bear the Fertitta name on campus. In 2016, Fertitta made a $20 million donation to UH athletics that transformed the former Hofheinz Pavilion into the Fertitta Center.

In a speech given to the Board, President and Chancellor Renu Khator thanked Fertitta for his generous donation and said she was happy Fertitta was putting his money “where his heart is.”