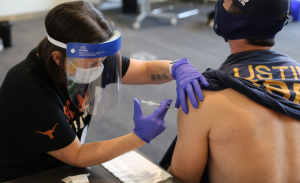 The vaccine shipments were expected later this month, but thanks to Dell Medical School, 25 AFD firefighters and a corresponding number of paramedics and EMTs from Austin-Travis County EMS received theirs on Saturday. They were among the first in the state to do so.

“The men and women of the Austin Fire Department have been serving on the frontlines of this pandemic since the beginning,” said Fire Chief Joel G. Baker. “We’re excited to be on the frontlines again with the rollout of the COVID-19 vaccine so that we can continue to safely serve the citizens of Austin in their times of need.”

More vaccinations are expected throughout the weekend and into next week.

“We’re lucky to have such a close working relationship with our hospital partners. To be invited to get vaccinations earlier than expected was an opportunity we could not and would not pass up,” said Ernesto Rodriguez, chief of Austin-Travis County EMS. “It really is a blessing to have such a good partnership and work together to ensure the safety of all the health care workers in our area. Getting the vaccines ahead of our expected timeline means that our hardworking EMTs and paramedics will be able to safely care for Austin-Travis County residents all the sooner.”

8 a.m. – Two Fourth Street bars have recently announced temporary closures due to COVID-19 cases among employees. On Dec. 16, Rain On 4th announced that it would be closed this weekend after an employee tested positive for the virus. The bar said before it reopens, all staff and entertainers will have to provide multiple negative test results over an extended period.

On Dec. 11, Oilcan Harry’s had announced one of its entertainers had tested positive for COVID-19 after working at the bar on Dec. 6 and being there again on Dec. 9. Oilcan Harry’s said all employees will get tested prior to returning to work when the bar reopens.