Houston police chief Art Acevedo has announced a task force to combat road rage incidents on our streets and roadways, where law enforcement will proactively look for people committing crimes. 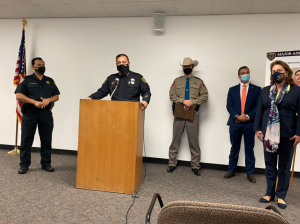 Acevedo said that, according to preliminary crime analysis, there have been about 200 incidents in the first 10 months of this year that have ended with someone being shot on our roadways compared to 150 during the same period a year ago.

Six of the road rage incidents through October have led to murder, Acevedo said, including the case involving HPD Sgt. Sean Rios.

Rios was shot to death in November during a gun battle in north Houston.

“Anyone who thinks they can go out there and engage in road rage and commit aggravated assault and thinks they’re going to get away with it would be wrong,” Acevedo said.

Texas DPS has been directed by Gov. Greg Abbott’s office to support violent crime initiatives such as this road rage prevention effort. DPS’s role will include having marked and unmarked units on Houston roads to locate aggressive drivers and respond to road rage incidents.

According to the agency, road rage incidents are often underreported when authorities respond to crashes.

Police have released the sketches of one incident that happened back in November on the North Loop. In that case, authorities believe the road shooting may have started on I-45 and eventually ended up on 610, where one of the suspects fired shots at 21-year-old Isaac Mendoza. Mendoza died at the hospital.

Then on Friday, Dec. 4, another shooting was reported that may have stemmed from road rage, the Harris County Sheriff’s Office said. That incident involved at least four vehicles at the intersection of Highway 249 and Bammel N. Houston. Deputies found a man between 35 and 45 years old with a gunshot wound. A mother and three children were also taken to the hospital with minor injuries.

Gonzalez referenced the Dec. 4 shooting at the press conference, calling on the community to slow down, calm down, and stop with the aggressive driving.

“This year has been very difficult, and there’s been a lot of loss both in our community and in our nation, and we shouldn’t be compounding that suffering with unnecessary carnage on our roadways,” Gonzalez said.

Harris County District Attorney Kim Ogg also attended the announcement. She explained that suspects involved could have their vehicles subjected to forfeiture as a criminal instrument.

“Just the fact that you’re using a gun, putting people’s lives at risk allows the district attorney’s office, under law, to subject a vehicle to forfeiture as a criminal instrument,” Ogg said. “I’m pledging our office will do this where the evidence supports it and where the officers have gathered enough information from you the public, which is often misreported as a minor traffic crime, but is often something far more deadly.”

Ogg also pleaded for the public to report reckless driving, anyone using guns on the roads, and freeway and road stunts and takeovers.

According to a fact sheet from the Texas Department of Insurance, approximately 80% of polled drivers express serious aggression, anger, or road rage at least once a year.

AAA says road rage is preventable and there are ways you can avoid getting into an incident or try to deescalate the situation.