More than two dozen people were found inside a southwest Houston home on Thursday night — held hostage in just their underwear, police said.

Among the victims was a girl who may be a minor.

Mauro Dominguez-Maldonado, a 36-year-old Honduran national who was illegally residing in Houston, has been charged with harboring 29 individuals. He is expected to make his first court appearance Monday.

The criminal complaint alleges the residence had boarded-up windows and deadbolt locks on the inside doors. If convicted, Dominguez-Maldonado faces up to 10 years in federal prison and a fine up to $250,000.

The horrific scene was discovered after one of the victims managed to escape, running down the street with barely any clothes and calling for help. Police responded, breaking open what appears to be an apparent human smuggling operation.

According to police, the discovery was made at a home in the 4800 block of Raven Ridge Drive around 9 p.m. Thursday. And what police found has left neighbors speechless.

“It was crazy. It was like, wow, I don’t have any words to say,” said neighbor Bruno Chavero.

Someone called 911 when they heard a man calling for help, and when police arrived, he led them back to the house he’d escaped.

Caught on a neighbor Bruno Chavero’s surveillance is the moment officers swarm in. Inside, they found more than two dozen people police say were being held against their will. Chavero watched it all unfold.

“Right when they started taking everyone out, that’s when they let us out, and I could see a few people walking out naked, basically,” Chavero said.

Police are now investigating this as an apparent human smuggling operation. They say the victims, all from different Latin American countries, including Honduras, El Salvador, Mexico, and Cuba had been picked up in Brownsville and held in the Houston home for days, some nearly a week.

“Like how can we not see that, or hear anything?” said neighbor, Stephanie Corona.

Police said one of the victims told them he’d been promised a job in Houston, but that all changed when they arrived.

“I just feel really bad for these people you know; I wish and pray for them to be okay now,” Chavero said.

Thursday night, one woman showed up to the scene, hoping her cousin who she’d lost contact with for two months, might be one of the victims.

“I hope that God has saved him. That’s why I came all the way over here,” said Andrea Baquedeno.

Baquedano rushed to the scene on Thursday night.

“I don’t know. I just had a feeling he was in that group,” Baquedano said.

She said her cousin was among them.

“He gave us a call and he said he was in there in the house and that the police got them,” she said.

Her cousin was trying to get to the U.S. from Honduras but she hadn’t heard from him in two months.

“I was worried because one of the men that they used to call us he said, ‘You know what. Your cousin is missing. He probably might be dead,'” Baquedano said.

She knew her cousin was in trouble.

She is relieved all the victims are safe.

“When he ran up to me he looked like he was all cut up,” Lewis said. “He had like cuts in his face. But he was in his red shorts, drawers. And he was barefoot.”

Lewis believes the man jump her gate to get away from the house.

She said she was in her front yard when the man ran up to her.

“Then I was backing up. I said, ‘What’s wrong, man? I can’t understand you. What are you talking about?’ And then he would look back that way,” Lewis said.

She said the man then ran to another home for help.

As for the victims, they were moved out of the cold and into a nearby school gym before immigration services picked them up. During that time, neighbors like Mayra Aleman stepped in to help, providing clothes and blankets to the victims.

Neighbors said three people moved into the rental home several months ago, and that the men were friendly and unassuming. 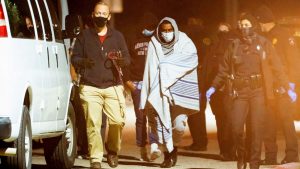