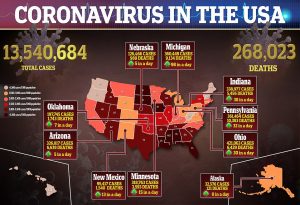 The number of Americans in hospital hit a grim new high on Monday as 96,039 people were confirmed to be admitted – an almost 12 per cent increase on the week before.

The total number of coronavirus cases in the United States for November surpassed four million on Saturday – more than double the 1.9 million record for October.

On Monday Scott Atlas, Donald Trump’s favorite member of the White House coronavirus task force – who angered many with his skepticism over lockdowns and face masks – resigned.

Unlike in the spring, when the epicenter was New York and the heartlands were relatively spared, now the pandemic is nationwide. Cases are rising in 41 states: North and South Dakota, Minnesota, Wyoming and Nebraska were among the hardest-hit.

And public health experts are warning that Americans who ignored advice and traveled over Thanksgiving will now make the situation worse: Dr Anthony Fauci described it as ‘a surge, superimposed on a surge’.