Donald Trump refused to take responsibility for his role in the riot at the Capitol, claiming his words to supporters shortly before the violence were “totally appropriate”.

Speaking to reporters shortly before leaving for Texas to champion his work on the border wall, the president was asked about a pro-Trump mob storming the Capitol last week.

During a separate gaggle with reporters shortly after he made those comments, Trump was asked what his role was in the violent riot.

“People thought that what I said was totally appropriate,” Trump said of his speech to supporters shortly before the riot.

In that speech, the president explicitly told his supporters to march to the Capitol as lawmakers certified Joe Biden’s victory in the presidential race. Five people have died as a result of the violence. 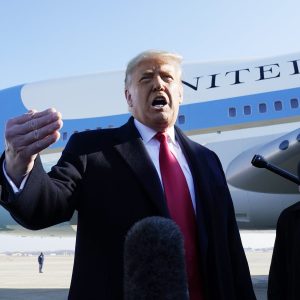