“It is important for us to keep going and do our part during this pandemic,” says Stanton Welch, Houston Ballet Artistic Director. “As artists, we need to keep creating and reflect this time, but we also owe it to our audience to instill joy this holiday season.”

The new works capture the unique 2020 holiday spirit. Featured tracks include “Jingle Bells” by Barbra Streisand and “Santa Baby” by Eartha Kitt. Each piece was filmed one Company dancer at a time in the Margaret Alkek Williams Dance Lab at the Houston Ballet Center for Dance under safety guidelines from Houston Methodist Hospital. Houston Ballet Academy will also have a dedicated number, continuing to offer performance opportunities for students.

The abbreviated version of Stanton Welch’s The Nutcracker follows the story of Clara’s magical journey to the Kingdom of Sweets and includes many iconic divertissements from the ballet. The 2018 performance footage features Yumiko Fukuda as Clara, Oliver Halkowich as Drosselmeyer, Mónica Gómez as The Sugar Plum Fairy and Luzemberg Santana as the Nutcracker Prince.

With an average single ticket price of $72 for an in-theater performance of The Nutcracker, Nutcracker Sweets offers a taste of The Nutcracker magic for a very sweet price of just $35. The program is available for pre-purchase now and can continue to be purchased through the final on-demand day at houstonballet.org.

With more than 50 years of rich history, Houston Ballet has evolved into a 61-dancer Company with a budget of $33.9 million and an endowment of $79.2 million (as of June 2019), making it the country’s fifth largest ballet company. Its Center for Dance is a $46.6 million state-of-the-art performance space that opened in April 2011 and remains the largest professional dance facility in America. Houston Ballet’s reach is global, touring in renowned theaters in Dubai, London, Paris, Moscow, Spain, Montréal, Ottawa, Melbourne, New York City, Washington, D.C., Los Angeles and more.

Houston Ballet attracts prestigious leaders in dance. Australian choreographer Stanton Welch AM has served as Artistic Director of Houston Ballet since 2003, raising the level of the Company’s classical technique and commissioning works from dance legends such as Julia Adam, George Balanchine, Aszure Barton, Christopher Bruce, Alexander Ekman, William Forsythe, Jiří Kylián, Edwaard Liang, Trey McIntyre and Justin Peck. Executive Director James Nelson serves as the administrative leader of the organization, a position he assumed in February 2012 after serving as the Company’s General Manager for more than a decade.

Beyond its stage presence, Houston Ballet maintains a strong foothold in continuing to foster a love for dance in future generations. Its Education and Community Engagement program reaches more than 70,000 individuals in the Houston area annually. Houston Ballet Academy trains more than 1,000 students every year, producing more than 50 percent of the elite athletes that comprise Houston Ballet’s current Company. 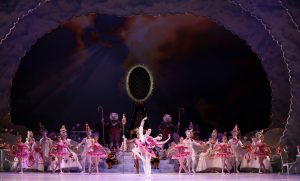