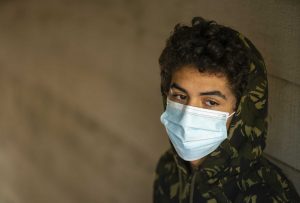 Students across Greater Houston failed classes at unprecendented rates in the first marking period, with some districts reporting nearly half of their middle and high schoolers received at least two F grades because they routinely missed classes or neglected assignments.

The percentage of students failing at least one class has doubled, tripled or even quadrupled in several of the region’s largest school districts, education administrators reported in recent days, a reflection of the massive upheaval caused by the novel coronavirus pandemic.

If those trends keep up, districts expect to see a decline in graduation rates, an increase in summer school demand and a need for intensive support to accommodate students falling behind, among numerous other consequences.

“Our internal failure rates — not (standardized) tests, just our teachers teaching, grading, assessing kids — are like nothing I’ve ever seen before,” said Alief ISD Superintendent HD Chambers, who reported nearly half of his students failed at least one class to start the school year.

“I’ve told our teachers to use the same professional judgment you’ve always used, but I don’t want our standards lowered. We’re not creating these false narratives that you’re doing OK and let someone move on without being competent in the area we’re teaching.”

The failure rates illustrate the monumental challenge faced by students, families and school districts trying to navigate the pandemic while remaining engaged in learning.

Across the region, slightly more than half of students have returned to campuses for in-person classes, though families and educators report that children are spending far more time on computers while in the classroom. The remaining students remain at home in online-only classes, where many are easily distracted and are less accountable to teachers.

So far, early returns are raising alarms, particularly in districts with the highest-need students.

In Houston ISD, the state’s largest district, Interim Superintendent Grenita Lathan said 42 percent of students failed two or more classes in the first marking period, up from about 11 percent in a typical year. Unlike many other Houston-area districts, HISD only held online classes during its initial six-week grading period.

Officials in Cy-Fair ISD, the region’s second-largest district, reported 41 percent of online-only middle and high school students failed at least one class, compared to 15 percent of those attending in-person instruction.

In Aldine ISD, one of the region’s biggest and highest-poverty districts, nearly half of freshmen, sophomores and juniors failed at least two classes, triple the previous year. Meanwhile, about 25 percent of middle school students received at least two F grades, about five times higher than 2019-2020.

To the north, Spring ISD reported its share of middle and high school students failing at least one course doubled from the previous year, rising to 35 percent.

“Kids know what they need to do in order to be counted present and pass some of their courses,” HISD Interim Superintendent Grenita Lathan said. “But lack of engagement is the major concern.”

While students continue to connect with teachers via Zoom and download coursework, parents and other family members have not been nearly as successful as teachers in ensuring assignments gets done.

Alonzo Reynolds III, the third-year principal of Spring’s Dekaney High School, said many working parents leave older children home alone during the school day. When they return, some parents do not double-check their work in the evening or know how to access the district’s learning platforms.

“(Parents) might monitor if you’re logging in, but not if you’re doing that assignment,” Reynolds said. “That accountability piece isn’t there.”

Erik Williams, the father of an 18-year-old junior taking online-only courses at Dekaney High, said he has struggled to monitor his son’s progress while also working as a security officer from 11 a.m. to 7 p.m. each weekday.

Since the start of online classes in August, Williams regularly has received messages from school officials telling him his son, Chandler, did not complete his online coursework or never logged into class. Williams hoped Chandler would catch up on his credits and graduate in the spring, but those prospects dwindle with each absence.

“It’s a huge worry,” Williams said on a recent Saturday, when Spring administrators visited his second-floor apartment to re-engage with Chandler. “He wasn’t where he was supposed to be coming into this year, so this really didn’t help him. With the way I work, I can’t be there standing over his shoulder all day. He’s going to have to motivate himself.”

The challenge of keeping online students engaged also has re-engineered the job facing teachers, who now spend more time connecting with kids and families at the expense of delivering instruction.

Carmen Burch, a chemistry teacher at Aldine’s Eisenhower High School, said she spends much of her 10-hour workday trying to connect with parents and guardians of students who are not logging in to online classes. She estimated about 20 of her 200 students were failing because they are skipping virtual instruction.

“I have one parent who has changed cell phone numbers at least six times, and it’s not even the end of the semester,” Burch said. “That’s the biggest headache I have. Half the numbers don’t work and half the parents don’t have a legit email.”

“For some (teachers), they’re feeling like their day never ends,” Watson said. “It goes all day and all into the evening, just to start over the next day.”

If failure rates remain high, however, the impact could be long-lasting for students and districts.

“We’re going to have to be mapping things out for how to use every minute of remediation, thinking about a two- to three-year span for getting kids back on course,” Aldine Chief Academic Officer Todd Davis said.

Districts could add summer school courses in the coming years to help students make up for failing grades, but the cost of those programs already worries some school leaders. Texas legislators and education officials have not pledged to allocate additional funding for summer school ahead of next year’s legislative session.

“Those extra courses that students normally take — for us, it’s called ‘credit recovery’ — that we pay for now, we would have to start charging for services,” Lathan said. “I know some school districts do it now, but based on our district, it’s hard to charge.”

In recognition of struggles in virtual learning, Texas Education Commissioner Mike Morath decided last month to allow public school districts to force their failing online students back into the classroom, with some exceptions.

At least one Houston-area district, Angleton ISD, announced it will employ this option starting in its second semester. However, other districts have been reluctant to order students to attend in-person classes as COVID-19 cases rise.

After Spring administrators left their apartment, Chandler and Erik Williams said they hope to return to Dekaney in the coming weeks, where Chandler can better connect with teachers.

“I definitely know what I want to do: It’s go back to school,” Chandler Williams said. “Staying home, doing the online work, it just isn’t working.”