HISD board votes not to remove ‘interim’ from Lathan’s title; national search to resume 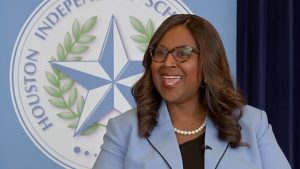 This after the board of trustees voted, 6-3, Thursday to not make her a sole finalist for the job.

Well over a hundred people signed up to speak at Thursday night’s meeting — held virtually. While Lathan also attended to learn her fate. And there was a mix of strong opinions on both sides of the motion.

“She’s the leader of our district yet she has failed and continues to fail an entire subsection of students that she is responsible for educating,” said Halverson.

There were almost as many in support.

“We should not pass up the opportunity to solidify this proven and passionate leader,” Jesse Woods said.

Earlier in the day the Houston NAACP preemptively sent out a statement also in support of Lathan being named the sole finalist. Vice President Dr. James Dixon cited what he called Lathan’s ability to work with others and provide stability.

“It’s time that HISD understands the need for stable leadership,” Dixon said. “Changing just to change, without the change being necessarily based on merit is unwise.”

But in the end, the trustees voted against making Lathan the sole finalist — only to vote minutes later to continue their nationwide search. Lathan is free to reapply for the position.