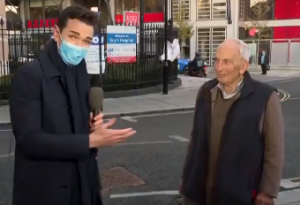 A 91-year-old British grandfather has won the internet’s heart after giving an interview after being among the first people in the world to receive a COVID-19 vaccine outside of a clinical trial.

“Well, there’s no point in dying now when I’ve lived this long, is there?” Martin Kenyon, the London man, bluntly told outside Guy’s Hospital on Tuesday.

The interview came after the United Kingdom began its first round of COVID-19 vaccinations, administering injections to people over 80 who are either hospitalized or have outpatient appointments scheduled as well as some nursing home workers.

Kenyon described getting to the hospital and the lunch he had had before.

“Of course I couldn’t damn well find anywhere to park my car, so I was late,” he quipped. “Anyway, I’m here now. I got inside and they put me on the list. I went off and had a rather nasty lunch and then came back and they were ready for me.”

Kenyon added that the process was easy and painless: “No, it didn’t hurt at all. I didn’t know the needle had gone in ’til it had come out.”

Kenyon said he has grandchildren that he hasn’t hugged in months and would like to do so for Christmas: “I hope I’m not going to have the bloody bug now. I don’t intend to have it.”

According to the Evening Standard, Kenyon was an anti-apartheid activist and friend of Desmond Tutu.

And he wasn’t the only person in the U.K. to gain some viral fame on Tuesday. The country’s first recipient was grandmother Margaret Keenan, who turns 91 next week.

The second was none other than William Shakespeare, 81. Sharing the same name as the U.K.’s most famous poet and playwright, Bill, as family and friends call him, said he was “pleased” to get the shot.

In an interview Wednesday morning with Piers Morgan on “Good Morning Britain,” Kenyon called the attention he’s received “rather ridiculous” and hoped it was just “24-hour nonsense.”

Kenyon kept up his British wit in the interview, asking Morgan, “Now who are you?”

Morgan said Kenyon had been going to the hospital for other reasons and was able to get the vaccine.

“It seemed sensible to get on with it,” Kenyon told Morgan.

Kenyon also stressed the importance of others getting vaccinated.

“I think it would be foolish of them to be reluctant about it if it means the chance of them behaving normally instead of being worried they might get the horrible bug,” he said.